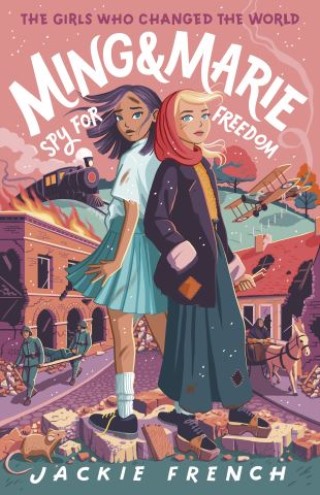 Ming and Marie Spy for Freedom (The Girls Who Changed the World, #2

An empowering and exhilarating look at the girls who went before us, and the way they shaped the world.

Ming Qong is convinced that girls have changed the world throughout history.

So when Ming is thrust back in time to Belgium during WWI, only to be rescued from a burning cellar by Marie -- an experienced spy at only twelve years of age -- she finally has her proof. Marie is involved with a female secret resistance group who risk their lives to outwit the German troops.

But Ming now faces a tough choice: will she send coded messages and risk her own life in this war on which the future depends?

As Ming learns, change is never easy, so how can one girl change the world?

From one of Australia's favourite writers comes an inspiring series for all the young people who will, one day, change the world.

Jackie French: Jackie French AM is an award-winning writer, wombat negotiator, the 2014–2015 Australian Children's Laureate and the 2015 Senior Australian of the Year. In 2016 Jackie became a Member of the Order of Australia for her contribution to children's literature and her advocacy for youth literacy. She is regarded as one of Australia's most popular children's authors and writes across all genres — from picture books, history, fantasy, ecology and sci-fi to her much loved historical fiction for a variety of age groups. ‘A book can change a child's life. A book can change the world' was the primary philosophy behind Jackie's two-year term as Laureate.