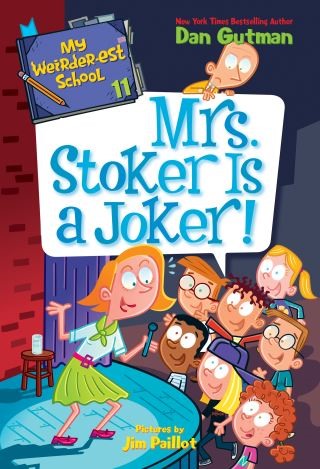 My Weirder-est School #11: Mrs. Stoker Is a Joker!

With more than 30 million books sold, the My Weird School series really gets kids reading! In this penultimate book of the My Weirder-est School arc, grab a chair with A.J. and his friends as Ella Mentry School welcomes a new principal to the stage—put your hands together for Mrs. Stoker!

Mr. Klutz is retiring! (A surprise even to him, courtesy of scheming Dr. Carbles.) Vice principal Mrs. Jafee thinks it’s her time to shine, but Dr. Carbles has hired someone else for the job! Stand-up comedian Mrs. Stoker is ready to defend her place as principal in a joke-off against Mrs. Jafee.

Will Mrs. Stoker have the last laugh? Or will she lose her audience when things get serious?

Perfect for reluctant readers and all kids hungry for funny school stories, Dan Gutman’s hugely popular My Weird School chapter book series has something for everyone. Don’t miss the hilarious adventures of A.J. and the gang!