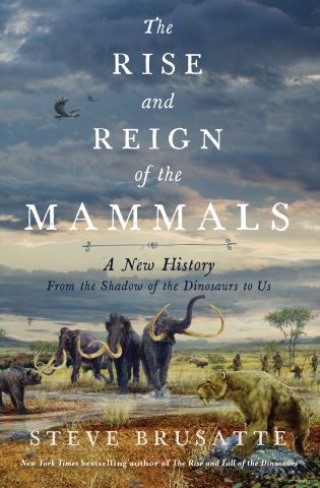 The Rise and Reign of the Mammals

A New History, from the Shadow of the Dinosaurs to Us

New from the author of acclaimed bestseller The Rise and Fall of the Dinosaurs ("A masterpiece of science writing" —Washington Post) and “one of the stars of modern paleontology” (National Geographic), a sweeping and revelatory history of mammals, illuminating the lost story of the extraordinary family tree that led to us

We humans are the inheritors of a dynasty that has reigned over the planet for nearly 66 million years, through fiery cataclysm and ice ages: the mammals. Our lineage includes saber-toothed tigers, woolly mammoths, armadillos the size of a car, cave bears three times the weight of a grizzly, clever scurriers that outlasted Tyrannosaurus rex, and even other types of humans, like Neanderthals. Indeed humankind and many of the beloved fellow mammals we share the planet with today—lions, whales, dogs—represent only the few survivors of a sprawling and astonishing family tree that has been pruned by time and mass extinctions. How did we get here?

In his acclaimed bestseller The Rise and Fall of the Dinosaurs—hailed as “the ultimate dinosaur biography” by Scientific American—American paleontologist Steve Brusatte enchanted readers with his definitive his - tory of the dinosaurs. Now, picking up the narrative in the ashes of the extinction event that doomed T-rex and its kind, Brusatte explores the remarkable story of the family of animals that inherited the Earth—mammals— and brilliantly reveals that their story is every bit as fascinating and complex as that of the dinosaurs.

Beginning with the earliest days of our lineage some 325 million years ago, Brusatte charts how mammals survived the asteroid that claimed the dinosaurs and made the world their own, becoming the astonishingly diverse range of animals that dominate today’s Earth. Brusatte also brings alive the lost worlds mammals inhabited through time, from ice ages to volcanic catastrophes. Entwined in this story is the detective work he and other scientists have done to piece together our understanding using fossil clues and cutting-edge technology.

A sterling example of scientific storytelling by one of our finest young researchers, The Rise and Reign of the Mammals illustrates how this incredible history laid the foundation for today’s world, for us, and our future.

Steve Brusatte, PhD, is an American paleontologist who teaches at the University of Edinburgh, in Scotland. He is the author of the international bestseller The Rise and Fall of the Dinosaurs. The paleontology advisor on the Jurassic World film franchise, Brusatte has named more than fifteen new species, including the tyrannosaur “Pinocchio rex” (Qianzhousaurus), the raptor Zhenyuanlong, and several ancient mammals. His research and writing has been featured in Science, the New York Times, Scientific American, and many other publications.