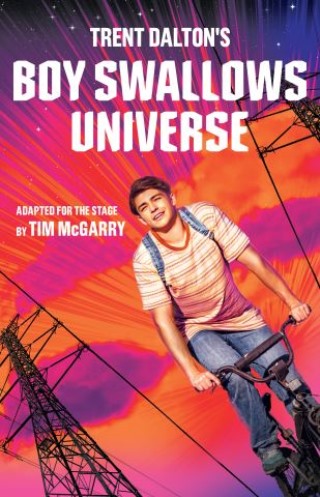 The bestselling novel, which has taken Australia and the world by storm, now comes alive onstage.

Brisbane, 1985: A lost father, a mute brother, a mum in jail, a heroin dealer for a stepfather and a notorious crim for a babysitter. It's not as if Eli Bell's life isn't complicated enough already. He's just trying to follow his heart and learn what it takes to be a good man, but life keeps throwing obstacles in his way - not the least of which is Tytus Broz, legendary Brisbane drug dealer.

Soon Eli is beset by chaos on all sides, and a run-in with the local crime king and his henchman launches the 13-year-old with the old soul on a journey to find out what kind of man he is going to be.

Adapted by Tim McGarry from Trent Dalton's smash-hit novel, Boy Swallows Universe is an exhilarating story of magic and madness, of beauty and brutality, of joy and heartbreak, and of the power of love to triumph over the darkest of circumstances.

Trent Dalton is the author of Boy Swallows Universe (HarperCollins, 2018), the critically acclaimed international and national bestseller and winner of the 2019 Indie Book of the Year Award, the MUD Literary Prize, and the UTS Glenda Adams Award for New Writing and People's Choice Award at the 2019 NSW Premier's Literary Awards. At the 2019 Australian Book Industry Awards, the novel won a record four awards, including the prestigious Book of the Year Award. Boy Swallows Universe has been published across thirty-four territories, and the 2021 stage show was a record-breaking success for Queensland Theatre. His second novel, All Our Shimmering Skies (HarperCollins, 2020), was a number-one national bestseller and was shortlisted for the 2021 ABIA Awards. His non-fiction book Love Stories (HarperCollins, 2021) was also a number-one Australian bestseller and the winner of the 2022 Indie Book of the Year Award. Trent is also a two-time winner of a Walkley Award for Excellence in Journalism, a four-time winner of a Kennedy Award for Excellence in NSW Journalism and a four-time winner of the national News Awards Features Journalist of the Year.