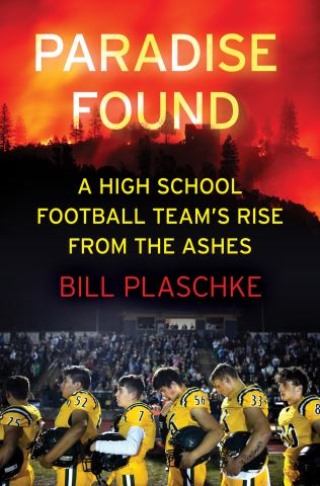 A High School Football Team's Rise from the Ashes

"Friday Night Lights meets Unbroken." —Tony Reali | "One of the most profound stories you will ever read." —Ian O'Connor | "Plaschke delivers a masterpiece." —Jeff Pearlman

From L.A. Times columnist and ESPN Around the Horn panelist Bill Plaschke, a story of tragedy, triumph, and the remarkable power of high school football in one small California town

On November 8, 2018, the Camp Fire ravaged the town of Paradise, California. The fire, which burned up to 80 acres per minute, killed 86 people, and nearly every building and home in the town was reduced to ashes. In a single day, Paradise, a proud working-class town in the foothills of the Sierra Nevadas, saw its population fall from 25,000 to 2,000.

The Paradise High football team had long been the town’s source of joy and inspiration. But in the wake of the fire, their season was abruptly cancelled on the eve of the playoffs. Their championship hopes were gone. Their program’s survival seemed doubtful—it wasn’t even clear whether Paradise High would continue to exist.

Coach Rick Prinz had planned to retire that year after guiding the Paradise High Bobcats for two decades. But after the fire forever altered his beloved town, he realized he couldn’t walk away. What ensued was the challenge of a lifetime. Of the 104 football players at Paradise, 95 had lost their homes. His varsity squad, which had stood 76 strong the previous season, was down to 22. Most of those who remained were homeless, sleep-deprived, lost. On the first day of spring practice, on a debris-ridden patch of grass at nearby Chico Airport, Prinz’s team didn’t even have a football. It was the humble beginning to a memorable journey.

Bill Plaschke, longtime columnist for the Los Angeles Times, followed the Paradise Bobcats throughout a most remarkable season. In this gripping, deeply-reported story of tragedy and resilience, Plaschke reveals the unique power of sports to unite, to inspire, and to heal. As the Paradise players fought to rebuild their broken lives, they found strength in the support of their teammates—and as football returned to Paradise, so, too, did the spirit of the town itself.

Bill Plaschke has been an L.A. Times columnist since 1996. He has been named national sports columnist of the year eight times by the Associated Press. He is the author of five books, including a collection of his columns entitled, Plaschke: Good Sports, Spoil Sports, Foul Ball and Oddballs. Plaschke is also a panelist on the popular ESPN daily talk show, Around the Horn. He has been named Man of the Year by the Los Angeles Big Brothers/Big Sisters and has received a Pursuit of Justice Award from the California Women’s Law Center.