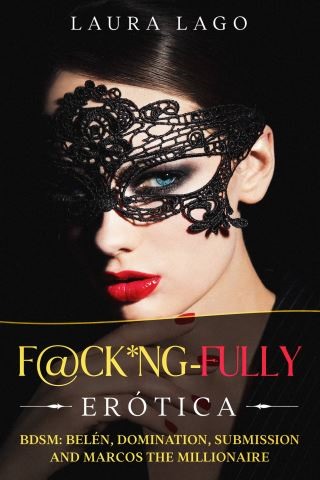 First of all: Sex, Erotica, and busting hot topics.
How? BDSM, a Millionaire, and an atypical "submissive".
My name is Belen and I am a bitter office worker. Like every morning, I get on the train to the cubicle where, from nine to five, I push a pen and pound on a keyboard. And no, I'm not a millionaire's secretary, but this morning there was an aggressive-executive on the train.
Tall, handsome, athletic, with all the physical virtues, and holding enough to wish that he would tie me to the bed and take me to nirvana the hard way. But there he is, growling at a telephone as if he was the king of the world and his interlocutor a poor devil who has screwed up.
As he gets off the train, two stops before mine, he slips the phone into his briefcase but misses and falls to the ground. I pick it up while doors are slammed in my face, a man turning a deaf ear to my attempt to be a good citizen.
Now is when what you don’t know about me comes out. I’m not ashamed, but I am missing two screws. Out of curiosity, I had no qualms about taking a look at their conversations. And when I saw that there was explicit content, a bigger look. Having seen what I saw, I decided to review the photos of him, and even saw in his mail an order from a "Toy Store" thanks to which I was able to "locate where I could locate the owner and return the mobile." Watching his videos was also a necessary evil.
So I went to his office. His secretary, of course, told me that he was very busy and had no intention of seeing me. I put my cell phone on the table and left. It is possible, I admit, that I have left a photo of me on his cell phone. A photo as explicit as yours.
He didn't know if he would see her.
I didn't expect him to call me.
He didn't expect to sweat and groan on the other end of the line.
I didn't expect him to send his driver to pick me up.
The truth? Once in the car, if I expe

Laura Lago: Laura Lago is a consecrated writer with years of experience and various titles in the Top of its category. Her books do not leave anyone indifferent, and her readers come back for more and patiently wait for her to publish next work.