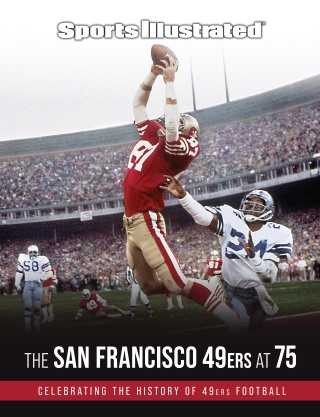 Celebrate the championship glory, Hall of Fame personalities, and passionate fans that make the San Francisco 49ers one of the most beloved franchises in football

The oldest professional sports team in the Bay Area, the San Francisco 49ers have thrilled their loyal fans for seven and a half decades. Founded in 1946 as a charter member of the All-America Football Conference, the 49ers joined the NFL when the leagues merged in 1949.

Playing in old Kezar Stadium at in Golden Gate Park, the 49ers found fleeting success in their early years, reaching the playoffs just once in the 1950s and '60s. From those humble beginnings emerged one of the NFL's most successful franchises.

Sports Illustrated&trade; celebrates the franchise with The San Francisco 49ers at 75, an extraordinary collection of classic stories and photographs from the pages of SI. This commemorative book also solutes, in words and pictures, the 49ers' dedicated fans.

From Kezar to Candlestick to Levi's, fans will unearth golden nuggets from the 49ers's past on each page of this diamond celebration.