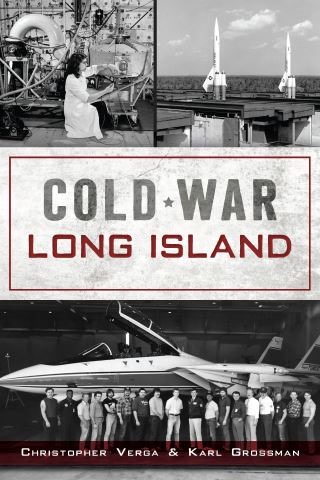 By the close of World War II, Long Island had transformed from a rural corridor to a suburban behemoth. The region became a nationally recognized manufacturing and innovation hub for the military and possessed one of the fastest-growing middle-class populations in the country. But behind the manicured lawns and cookie-cutter cape homes, locals were adapting to new Cold War conflicts and facing anxieties of a potential nuclear fallout. Secret nuclear missile sites and classified government laboratories were established on the outskirts of Suffolk County, often among unaware residents. Soviet spy rings traversed across the island, seeking to steal industry secrets and monitor military installations. Author Christopher Verga and veteran journalist Karl Grossman bring to life the often overlooked history of the Cold War era in Nassau and Suffolk Counties.

Christopher Verga: Christopher Verga is an instructor of Long Island History and Foundations of American History at Suffolk Community College. His published works include Civil Rights Movement on Long Island (Images of America Series), Bay Shore (Images of America Series) and Saving Fire Island from Robert Moses. Karl Grossman is a full professor of journalism at the State University of New York/College at Old Westbury. He founded and was the first president of the Press Club of Long Island. He was selected to be in the original class of its Long Island Journalism Hall of Fame. He has also been cited by it as "Long Island Journalist of the Year."|||