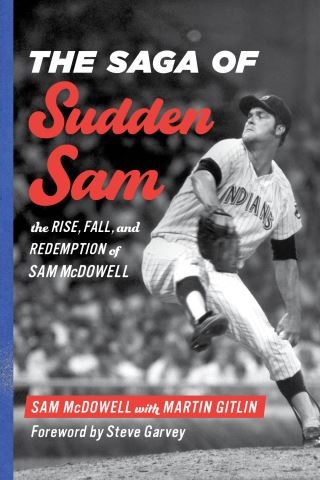 The Saga of Sudden Sam

The Rise, Fall, and Redemption of Sam McDowell

The candid autobiography of all-star pitcher “Sudden Sam” McDowell, whose alcohol-fueled life quickly and famously spiraled out of control, and his ultimate redemption as a counselor for other athletes suffering from addiction.

Sam McDowell seemed to have it all. Considered by many to be the next Sandy Koufax when he signed with the Cleveland Indians, Sam boasted one of the fastest arms in major league baseball. But on the inside, he was playing in an alcoholic fog, beset by addiction, depression, narcissism, and thoughts of suicide.

The Saga of Sudden Sam: The Rise, Fall, and Redemption of Sam McDowell is the captivatingly honest autobiography of the six-time American League all-star pitcher and self-admitted “worst drunk in baseball.” Sam holds nothing back, sharing the pressures he felt as a young baseball phenom, his frustrations over a lack of coaching to help develop his talent, the pitfalls of his dangerous alcoholic lifestyle, and his attempted suicide. When “Sudden Sam” finally hit rock bottom, certain he had been defeated by alcoholism, he instead found hope, rehabilitation, and sobriety. After extensive education and training, he emerged as the first successful counselor in major league baseball. Sam helped to turn around the lives of players who, just like him, had fallen into the abyss of addiction or faced psychological and emotional problems that were destroying their careers.

With details of his own severe battles with depression and addiction told alongside the struggles of players who came to him for help, The Saga of Sudden Sam offers special insight into the longstanding addiction issues that plague Major League Baseball. It also provides understanding and hope to anyone struggling with addiction and shows that recovery is attainable.

Sam McDowell was a six-time American League all-star pitcher whose career was derailed by alcoholism. After hitting rock bottom in 1980 he launched his recovery and studied psychology, sports psychology, and counseling. He has worked as an addiction counselor, EAP, and career enhancement counselor for Major League Baseball and the Baseball Assistance Team (BAT) for more than 40 years. He lives in The Villages, FL.

Martin Gitlin won more than 45 awards as a sports writer, including first place for general excellence from the Associated Press for his coverage of the World Series. He is the author of more than 200 books on a variety of subjects, including many about baseball. Gitlin lives in North Olmsted, OH.