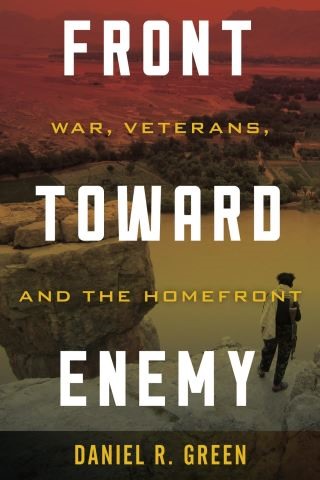 War, Veterans, and the Homefront

A unique and much-needed perspective on the transitions veterans go through after returning home from war service.

It is a difficult time to be a veteran of a small war in the United States. After twenty years of combat and counter-insurgency, a generation of Afghan, Iraq, and Global War on Terror veterans struggle to integrate back into civilian society and lead productive lives. As the wars these men and women have participated in continue—while they simultaneously recede to the past—many feel a sense of estrangement from their country, friends, and prior lives. They often long to return to war but hope to never go again and are stuck in a nether world of war without end and peace that does not exist.

In Front toward Enemy: War, Veterans, and the Homefront, Daniel R. Green uses his own experiences with war from having served five military and civilian tours in Afghanistan and Iraq and provides a different perspective on the transition home. Using sociological, philosophical, literary, cultural, historical, and political perspectives he provides a venue for the countless conversations he has had with his fellow veterans about their own experiences as a way to assist others with their transition from war and the military to peace and civilian life. Green provides not just a war veteran’s views but the amplifying perspective of a political scientist—as well as a reserve officer—in order to rescue the issue of the “returning veteran” from the field of psychology and to broaden the understanding of the experience of war for veterans. This book bridges the gap between war veterans and their fellow citizens, sheds light on the quiet conversations that take place among veterans about their experiences, and enriches the collective understanding of how wars affect people.

Daniel R. Green, PhD, is a Commander in the US Navy Reserves and has mobilized four times for service in the wars in Afghanistan and Iraq. He also served with the US Department of State as the political advisor to a Provincial Reconstruction Team in southern Afghanistan. He is the author of The Valley's Edge: A Year with the Pashtuns in the Heartland of the Taliban and In the Warlords’ Shadow: Special Operations Forces, the Afghans, and their Fight Against the Taliban, and coauthor of Fallujah Redux: The Anbar Awakening and the Struggle with Al-Qaeda. He has also served as the Deputy Assistant Secretary of Defense for Strategy and Force Development (2019-2021) with the Office of the Secretary of Defense at the US Department of Defense. He is a recipient of the Secretary of Defense’s Award for Outstanding Public Service (2021), the Office of the Secretary of Defense’s Exceptional Public Service Award (2009), the US Department of State’s Superior Honor Award (2005), and the US Army’s Superior Civilian Honor Award (2005).