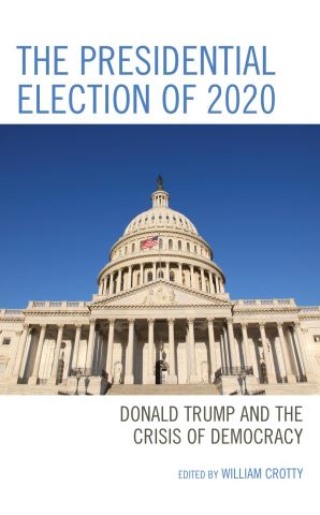 The Presidential Election of 2020

Donald Trump and the Crisis of Democracy

The Presidential Election of 2020: Donald Trump and the Crisis of Democracy places the election of 2020 within the context of the Trump presidency, a chaotic and tense time in American politics and a dangerous one. The election is analyzed in depth and its meaning for the state of American society is made clear. A major theme in the book is a critique of Donald Trump's leadership, his incompetence in office, his appeal to followers and the danger this has proven to represent. Among other things, he was accused of mental instability during his presidency. Yet he received the second highest vote total in American history, exceeded only by winning candidate Joe Biden's.

Trump was impeached twice for his actions in office but both times not held responsible for what he had done by a Republican-controlled Senate.

The election is placed in an on-going context. It was followed by strenuous attempts by Trump and associates to have states reverse their results and declare him the winner and by the Trump-organized seditious assault on the Capitol in which five people died. The objective was to force Vice President Mike Pence, who was chairing a Joint Session of Congress, normally a formality, to instead reject the Electoral College vote outcome. Pence would not do it. His life and that of Speaker Nancy Pelosi were threatened by the rioters.

The threat of a coup, a new development in American politics, and one led by Trump and others who share his views, remains. Meanwhile President Joe Biden in his efforts to reconstruct America has introduced the most ambitious policy agenda since the New Deal.