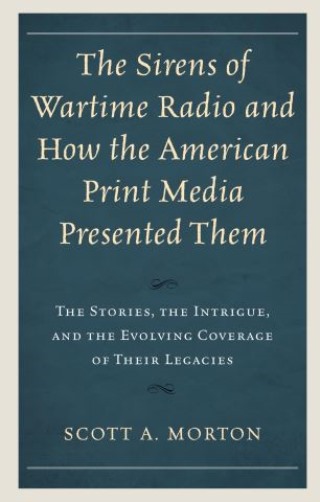 The Stories, the Intrigue, and the Evolving Coverage of Their Legacies

The Sirens of Wartime Radio and How the American Print Media Presented Them: The Stories, the Intrigue, and the Evolving Coverage of Their Legacies analyzes press coverage from the American print media that helped construct popular images of Tokyo Rose, Axis Sally, Seoul City Sue, and Hanoi Hannah. Coverage of these “radio sirens” essentially constructed and defined these women’s legacies for an American audience. Scott A. Morton examines newspaper and magazine coverage from the periods of each broadcaster, and in doing so, analyzes four primary research inquires. Morton discusses how American newspapers and magazines portrayed each woman to American readers, how the American mass media’s portrayal of them evolved overtime from the mid-1940s through the present, the ways in which the American mass media responded to these five female propagandists—either directly or indirectly—through print, radio, and visual media, and how the legacy of each woman has been kept alive in popular culture in the decades since their last broadcasts. Morton argues that for the most part, coverage of the sirens was borne out of fascination and aversion, fascination stemming from the novelty of women acting as high-profile agents of enemy propaganda organizations and aversion stemming from the potential power they had over U.S. servicemen and the fact that they were viewed as traitors to the U.S. Scholars of media studies, history, and international relations will find this book particularly useful.

Scott A. Morton is assistant professor of communication at Catawba College.

Scott A. Morton is assistant professor of communication at Catawba College.