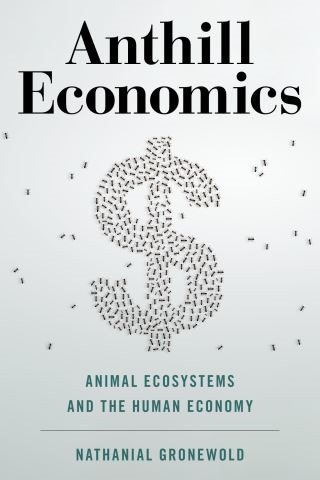 Animal Ecosystems and the Human Economy

Does modern economic theory violate the basic laws of nature and physics? That is the question that award-winning environmental and energy writer Nathanial Gronewold sets out to answer in Anthill Economics.

Drawing from the nascent field of biophysical economics, Anthill Economics puts forth a radical new way of thinking: as 21st-century citizens, the global economy truly is our human ecosystem. It is where raw materials are sourced, goods are supplied, energy is converted, and capital is exchanged. Shouldn't it stand to reason that the same principles that affect animal ecosystems (like population density, habitation patterns, and energy return on investment) similarly apply to our –albeit more complex –human ecosystem, too?

With an innovative and cross-disciplinary approach, Gronewold draws comparisons from both the animal kingdom and the atomic world. The rollercoaster-like rise and fall of the caribou population on a remote island can teach us about resource allocation. The behavior of squirrels gathering nuts is a lesson in energy return on investment. Could the high unemployment rates of anthill colonies shed light on problems with the human job market? And, will global warming change these patterns for humans and insects alike? Furthermore, if certain laws of physics can be used to explain the distribution of energy in a complex physical system, could these same laws also explain the distribution of money in a complex economic system as well?

This clearly written book full of illuminating ecological analogies provides a more complete understanding of human commerce shaped by the rules of nature and laws of physics.

Nathanial Gronewold is a veteran international journalist with experience running assignments in Pakistan, Colombia, Kenya, Haiti, Singapore, South Korea, Taiwan, and beyond. He is the winner of the 2019 National Press Club Award for newsletter writing. Gronewold has written close to 3,000 articles, including reports featured in Scientific American, Science Magazine, Asian Scientist, the Economist, and the New York Times. He is a two-time recipient of the Gold Prize for coverage of climate change from the United Nations Correspondents Association and received a 2012 honorable mention from the National Press Club. He is currently newsletter editor and lead journalist for Grow Further, a nonprofit organization sponsoring innovative agricultural projects in developing countries. He lives in northern Japan with his wife while pursuing his PhD in environmental science at Hokkaido University.You can read more of Gronewold's work at publicparks.org.