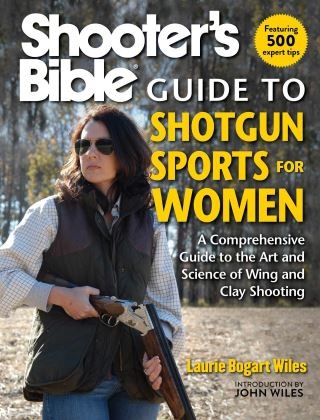 Whether they're beginners or seasoned shooters, women need to know some subtle (and not so subtle) differences to excel in—and enjoy—the shotgun sports.

Women can pick up tips on improving their stance or learn the basics in Shooter's Bible Guide to Shotgun Sports for Women. Also included are a detailed directory of shooting schools and instructors, youth programs, suggested reading, gunmakers, manufacturers of shooting attire and accessories, and an extensive glossary. Armed with the extensive knowledge and experience of Laurie Bogart Wiles, this handy guidebook is a great way for women to learn about shotgunning from a fellow woman.

Laurie Bogart Wiles: Laurie Bogart Wiles is an author of outdoor literature and historical works. She cofounded the Pinehurst Gun Club with her husband, John Wiles. Other books she has written include The Woman Angler, The Orvis Book of Gun Care and Maintenance, The Orvis Book of Sporting Dog First Aid, and Shooting Sports for Women. She lives in Pinehurst, North Carolina.

John Wiles has been hunter, shooter, and outdoorsman for fifty years. He is a professional shooting instructor, a professional guide in Maine and Maryland, and a shooting preserve operator and manager. He resides in Pinehurst, North Carolina.