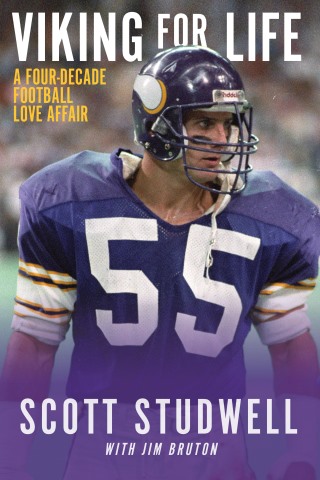 An unforgettable look at a lifetime of Vikings football packed with Studwell's insights into the game, on and off the field.

In professional football, careers are often short and turnover is a constant. So when one man's career spans more than four decades with one organization, it is quite an achievement.

Scott Studwell did just that with the Minnesota Vikings. As a linebacker, Studwell totaled a Vikings record 1,981 tackles in 14 seasons, reaching two Pro Bowls. After retiring as a player after the 1990 season, Studwell moved into the Vikings' player personnel department and served as the team's Director of College Scouting.

In Viking for Life: A Four-Decade Football Love Affair, Studwell shares stories from the Vikings teams of the 1970s and '80s under head coaches Bud Grant and Jerry Burns, teams that reached two NFC championship games.

He also provides rare insight into his three decades in the Vikings' scouting department and draft room, during which he helped the Vikings identify countless stars, including Randy Moss, Adrian Peterson, and Harrison Smith.

In the pages of this striking memoir, Studwell shares a passion for the Vikings that he calls "a dream come true."