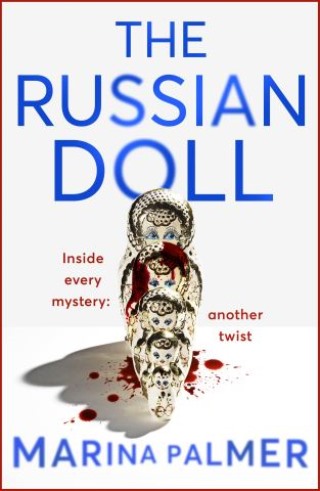 ‘An addictive read’ The Sunday Times

'Elena is a delicious villainess, and the compelling dynamic between plutocrat and protégée makes this an addictive read' - The Sunday Times

The Firm meets McMafia in Marina Palmer's thrilling and exciting novel, which opens the door on the Russian high life in London and corruption at the heart of British politics, reaching all the way into the Secret Services.

Packed with twists, intrigue, betrayal, romance and suspense, The Russian Doll constantly wrong-foots the reader and delivers a perfect narrative, right to the last page.

How much did she just say the salary was?

When Ruth Miller returns a dropped scarf to Elena Shilkov, she is whisked from a dreary shared house to a world of unimagined luxury.

The super-rich Russian wants a new personal assistant and won't take no for an answer.

Ruth gets accommodation, a credit card, and a complete wardrobe makeover.

And she's good at the job; distributing gifts, attending galas, dealing with the high-society movers and shakers fighting for Elena's attention.

Then the sinister truth begins to reveal itself, that nothing is quite what it seems in Elena's dangerous, deceptive world.

Ruth should get away.

But it's already too late.

'The Russian Doll gripped me with layer upon dangerous layer' - Alison Bruce, author of The Moment Before Impact

Imogen was born and brought up in Darlington and read Russian and German at Cambridge. Before becoming a full-time writer, she directed for TV, film, and radio. She is the author several novels, including the Crowther and Westerman series and The Paris Winter, and has co-written novels with former Labour Deputy Leader Tom Watson (The House), screenwriter Darby Kealey (Liberation as Imogen Kealey) and the legendary Wilbur Smith (King of Kings). Imogen has been shortlisted for the CWA Historical Dagger three times and for the CWA Dagger in the Library Award once. She has also written for Hampton Court Palace, chaired the Historical Writers' Association and been mentioned in Private eye twice.

Palmer is Imogen's husband's surname - she is married to the cheesemonger and author Ned Palmer - and she chose Marina as tribute to Russian Silver Age Poet Marina Tsvetaeva. She almost went for Anna, after Anna Akhmatova, but as her mother-in-law's name is Ann, that started getting a bit confusing. She, her husband, and her multiple identities live in south London.