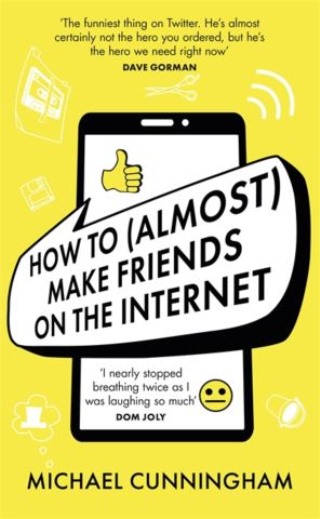 How to (Almost) Make Friends on the Internet

'Will have you in stitches' The Irish Times

'He's almost certainly not the hero you ordered, but he's the hero we need right now' Dave Gorman

'I nearly stopped breathing twice as I was laughing so much. Glorious." Dom Joly

And one very annoyed world

Based on the ingenious Sir Michael Twitter account, How to (Almost) Make Friends on the Internet is the funniest book you'll read this year.

Whether it's offering his services as a Karate Lawyer or Funeral DJ, devising the world's worst plan to get a free haircut, or trying to buy a blue bucket that may or may not be for sale, Michael just wants to connect with people.

The only problem is that people are slightly less enthusiastic about connecting with him and the results are utterly hilarious.

Warning: you'll never think about adding someone called Michael to a group chat the same way ever again.

'Finally, someone has worked out a good use for social media and it's brilliantly, painfully funny' Iain Morris, Co-creator of The Inbetweeners

'Michael is the funniest human on the internet, bar none. Read his book, you cowards' James Felton, author of 52 Times Britain was a Bellend

Michael is an expert in friendship, with several to his name. He lives in Ireland and works multiple shifts a week in the local shop.

You can find him giving advice on friendship on Twitter @michael1979.