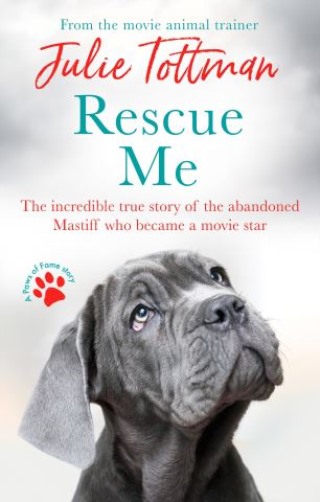 The second book in the Paws of Fame series.

Monkey is a young Neapolitan Mastiff; larger than life, full of energy and eager to please. But his human doesn't like him. He shouts at him all the time - Monkey doesn't know why - and he won't feed him. Monkey's so hungry his ribs are showing. Eventually his owner gives him away, saying Monkey is too aggressive, and Monkey finds himself in a rescue centre where he's cared for - but by people who are scared of him.

Meanwhile, up and coming animal trainer for the movies Julie Tottman is about to start filming Harry Potter and the Goblet of Fire, the fourth in the Harry Potter series, when crisis strikes: the dog playing Fang has dropped out. Julie needs to find a blue Neapolitan Mastiff to fill the part and fast. A big believer in rescuing dogs, she starts calling centres. As chance would have it, one in Northampton has a dog who might fit the bill - but he's supposed to be aggressive: too big a risk for a film set with children. But something tells Julie she should visit the dog first, just to be sure.

When she sees the gangly Monkey bounding over to her to say hello and looking up at her gently as she tickles his ears, she knows she has to take a chance on him. He needs feeding up, love, attention and something to put his energy into - and she can give him all those things. But with the film just around the corner, can Monkey become the movie star Julie is looking for? Rescue Me is the incredible true story of what a dog can do when someone believes in them.

Julie Tottman: Julie Tottman has been rescuing and training animals for the movies for over 25 years. Her credits include Game of Thrones, Harry Potter and 101 Dalmations among hungreds of others. She is a major advocate for animal welfare and feels very lucky to have her dream job.