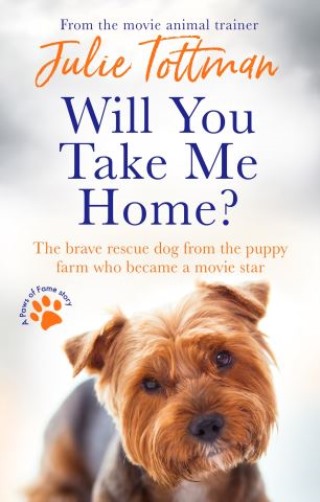 Will You Take Me Home?

The first book in the Paws of Fame series, which follows movie animal trainer Julie Tottman as she rescues, nurtures and transforms animals in need of a second chance into film stars.

Pickles the Yorkshire Terrier has just had her litter of puppies taken away from her - who knows how many litters she's delivered and watched the same thing happen to. She's been left behind in an overcrowded, noisy and dirty barn. She's very weak and her body is burning all over from a painful skin condition. This has been her life for six years and it will likely never change. Or will it?

Julie is a young animal trainer for the movies and is looking for a Yorkshire Terrier for a new film she's working on with Colin Firth and Amanda Bynes. By chance, she hears of a puppy farm that has been raided by the authorities - the dogs were kept in appalling conditions and among them was a poor Yorkshire Terrier called Pickles. Julie doesn't know whether Pickles will be the right dog for the film, but she doesn't care: Pickles needs a safe home with love and care and Julie can give it.

Will Pickles recover from the traumas of her past? Can she be the movie star Julie is looking for? And will Julie be able to make it in the world of movie animal trainers? Will You Take Me Home? is the moving true story of one woman and her dog.

The second book in the Paws of Fame story - Rescue Me, about the abandoned Mastiff who went on to play Fang in Harry Potter - is available now

Julie Tottman: Julie Tottman has been rescuing and training animals for the movies for over 20 years. Her credits include Game of Thrones, Harry Potter, Skyfall, Spectre, Chernobyl, Star Wars, Mamma Mia, Paddington, Marry Poppins Returns and Aladdin among hundreds of others. She is a major advocate for animal welfare and feels very lucky to have her dream job.