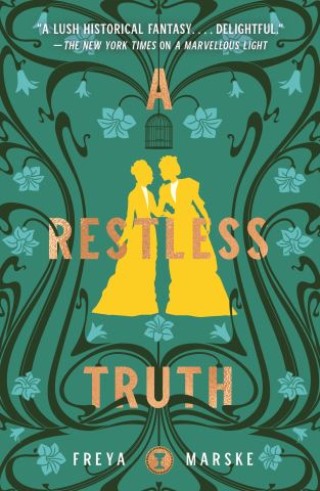 An Indie Next pick and LibraryReads pick—with three starred reviews!
A Most Anticipated in 2022 Book for BookPage | Autostraddle | Book Riot

A Restless Truth is the second entry in Freya Marske’s beloved, award-winning Last Binding trilogy, the queer historical fantasy series that began with A Marvellous Light.

Maud Blyth has always longed for adventure. She expected plenty of it when she volunteered to serve as an old lady’s companion on an ocean liner, in order to help her beloved older brother unravel a magical conspiracy that began generations ago.

What she didn’t expect was for the old lady in question to turn up dead on the first day of the voyage. Now she has to deal with a dead body, a disrespectful parrot, and the lovely, dangerously outrageous Violet Debenham, who’s also returning home to England. Violet is everything that Maud has been trained to distrust yet can’t help but desire: a magician, an actress, and a magnet for scandal.

Surrounded by the open sea and a ship full of suspects, Maud and Violet must first drop the masks that they’ve both learned to wear before they can unmask a murderer and somehow get their hands on a magical object worth killing for—without ending up dead in the water themselves.

Freya Marske: Freya Marske is the author of A Restless Truth and A Marvellous Light, which was an international bestseller and won the Romantic Novel Award for Fantasy. Her work has appeared in Analog and has been shortlisted for three Aurealis Awards. She is also a Hugo-nominated podcaster, and won the Ditmar Award for Best New Talent. She lives in Australia.