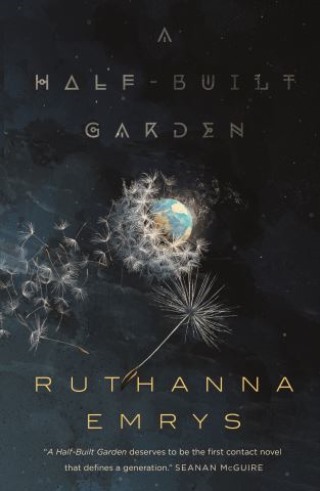 A literary descendent of Ursula K. Le Guin, Ruthanna Emrys crafts a novel of extraterrestrial diplomacy and urgent climate repair bursting with quiet, tenuous hope and an underlying warmth. A Half-Built Garden depicts a world worth building towards, a humanity worth saving from itself, and an alien community worth entering with open arms. It's not the easiest future to build, but it's one that just might be in reach.

On a warm March night in 2083, Judy Wallach-Stevens wakes to a warning of unknown pollutants in the Chesapeake Bay. She heads out to check what she expects to be a false alarm—and stumbles upon the first alien visitors to Earth. These aliens have crossed the galaxy to save humanity, convinced that the people of Earth must leave their ecologically-ravaged planet behind and join them among the stars. And if humanity doesn't agree, they may need to be saved by force.

But the watershed networks that rose up to save the planet from corporate devastation aren't ready to give up on Earth. Decades ago, they reorganized humanity around the hope of keeping the world liveable. By sharing the burden of decision-making, they've started to heal our wounded planet.

Now corporations, nation-states, and networks all vie to represent humanity to these powerful new beings, and if anyone accepts the aliens' offer, Earth may be lost. With everyone’s eyes turned skyward, the future hinges on Judy's effort to create understanding, both within and beyond her own species.

Ruthanna Emrys: RUTHANNA EMRYS lives in a mysterious manor house on the outskirts of Washington, DC with her wife and their large, strange family. Her stories have appeared in a number of venues, including Strange Horizons, Analog, and Tor.com. She is the author of the Innsmouth Legacy series, which began with Winter Tide. She makes home-made vanilla, obsesses about game design, gives unsolicited advice, and occasionally attempts to save the world.