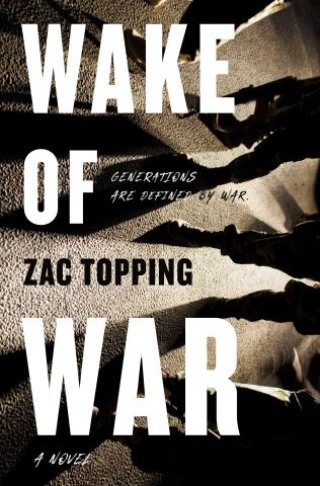 Zac Topping's Wake of War is a timely account of the lengths those with power will go to preserve it, and the determination of those they exploit to destroy everything in the name of freedom anew.

“I just hope I’m on the right side of history.”

The United States of America is a crumbling republic. With the value of the dollar imploding, the government floundering, and national outrage and resentment growing by the hour, a rebellion has caught fire. The Revolutionary Front, led by Joseph Graham, has taken control of Salt Lake City.

In a nation where opportunity is sequestered behind the gilded doors of the rich and powerful, joining the Army seemed like James Trent’s best option. He just never thought he’d see combat. Now Trent finds himself on the front lines fighting for something he doesn’t even know if he believes in. Destroying innocent lives wasn’t what he signed on for, and he can feel himself slipping away with every casualty.

Sharpshooter Sam Cross was just fourteen when American soldiers gunned down her parents and forced her brother into conscription. Now, five years later, retribution feels like her only option to stitch the wound of her past. She has accepted Joseph Graham’s offer to be his secret weapon. His Reaper in the Valley. But retribution always comes at a cost.

When forces clash in Salt Lake City, alliances will be shattered, resolve will be tested, and when the dust clears nobody will be able to lie to themselves, or be lied to, again.

Zac Topping: Zac Topping grew up in Eastern Connecticut where, contrary to popular belief, it’s not all trust funds and yacht clubs. He spent his formative years on the move, as some do, and discovered a passion for writing early in life. He is a veteran of the United States Army and has served two tours in Iraq. He currently lives with his wife in a quiet farm town in Connecticut and works as a career fire fighter. Wake of War is his debut novel.