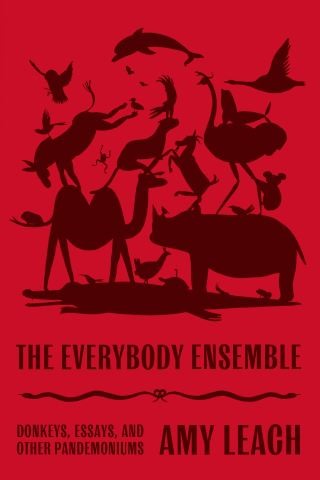 Donkeys, Essays, and Other Pandemoniums

In short, gloriously inventive essays, Whiting Award-winning author Amy Leach's The Everybody Ensemble invites us to see and celebrate our oddball, interconnected world

Are you feeling dismay, despair, disillusion? Need a break from the ho-hum, the hopeless, and the hurtful? Feel certain that there’s a version of our world that doesn’t break down into tiny categories of alliance but brings everybody together into one clattering, sometimes discordant but always welcoming chorus of glorious pandemonium?

Amy Leach, the celebrated author of the transcendent Things That Are, invites you into The Everybody Ensemble, an effervescent tonic of a book. These short, wildly inventive essays are filled with praise songs, poetry, ingenious critique, soul-lifting philosophy, music theory, and whimsical but scientific trips into nature. Here, you will meet platypuses, Tycho Brahe and his moose, barnacle goslings, medieval mystics, photosynthetic bacteria, and a wholly fresh representation of the biblical Job.

Equal parts call to reason and to joy, this book is an irrepressible celebration of our oddball, interconnected world. The Everybody Ensemble delivers unexpected wisdom and a wake-up call that sounds from within. For readers of Ross Gay, Eula Biss, Anne Lamott, Annie Dillard, Ralph Waldo Emerson, and even Lewis Carroll, these twenty-four essays will be a perfect match.

Amy Leach: Amy Leach grew up in Texas and earned her MFA from the Nonfiction Writing Program at the University of Iowa. Her work has appeared in The Best American Essays, The Best American Science and Nature Writing, and numerous other publications, including Granta, A Public Space, Orion, Tin House, and the Los Angeles Review of Books. She is a recipient of a Whiting Writers’ Award, a Rona Jaffe Foundation Award, and a Pushcart Prize. Her first book was Things That Are. Leach lives in Montana.