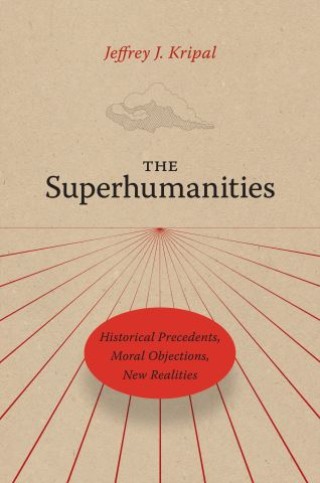 A bold challenge to rethink the humanities as intimately connected to the superhuman and to “decolonize reality itself.”

What would happen if we reimagined the humanities as the superhumanities? If we acknowledged and celebrated the undercurrent of the fantastic within our humanistic disciplines, entirely new cultural worlds and meanings would become possible. That is Jeffrey J. Kripal’s vision for the future—to revive the suppressed dimension of the superhumanities, which consists of rare but real altered states of knowledge that have driven the creative processes of many of our most revered authors, artists, and activists. In Kripal’s telling, the history of the humanities is filled with precognitive dreams, evolving superhumans, and doubled selves. The basic idea of the superhuman, for Kripal, is at the core of who and what the human species has tried to become over millennia and around the planet.

After diagnosing the basic malaise of the humanities—that the truth must be depressing—Kripal shows how it can all be done differently. He argues that we have to decolonize reality itself if we are going to take human diversity seriously. Toward this pluralist end, he engages psychoanalytic, Black critical, feminist, postcolonial, queer, and ecocritical theory. He works through objections to the superhumanities while also recognizing the new realities represented by the contemporary sciences. In doing so, he tries to move beyond naysaying practices of critique toward a future that can embrace those critiques within a more holistic view—a view that recognizes the human being as both a social-political animal as well as an evolved cosmic species that understands and experiences itself as something super.

Jeffrey J. Kripal: Jeffrey J. Kripal holds the J. Newton Rayzor Chair in Philosophy and Religious Thought at Rice University. He is the author of several books, including, most recently, The Flip: Who You Really Are and Why It Matters.