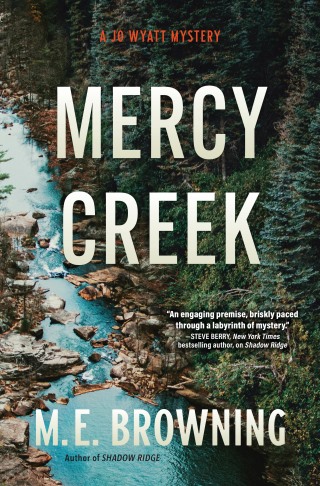 In an idyllic Colorado town, a young girl goes missing—and the trail leads into the heart and mind of a remorseless killer.

The late summer heat in Echo Valley, Colorado turns lush greenery into a tinder dry landscape. When a young girl mysteriously disappears, long buried grudges rekindle. Of the two Flores girls, Marisa was the one people pegged for trouble. Her younger sister, Lena, was the quiet daughter, dutiful and diligent—right until the moment she vanished.

Detective Jo Wyatt is convinced the eleven-year-old girl didn’t run away and that a more sinister reason lurks behind her disappearance.  For Jo, the case is personal, reaching far back into her past.  But as she mines Lena’s fractured family life, she unearths a cache of secrets and half-lies that paints a darker picture.

As the evidence mounts, so do the suspects, and when a witness steps forward with a shocking new revelation, Jo is forced to confront her doubts, and her worst fears. Now, it's just a matter of time before the truth is revealed—or the killer makes another deadly move.

M. E. Browning: M.E. BROWNING writes the Jo Wyatt Mysteries. The first in the series, Shadow Ridge, won the Colorado Book Award for Mystery and the silver medal in the popular fiction category of the Florida Book Awards. The adventures continue in Mercy Creek, which launches in October 2021. Writing as Micki Browning, she penned the Agatha-nominated and award-winning Mer Cavallo mysteries, Adrift and Beached, and her short stories and nonfiction have appeared in anthologies, textbooks, diving and mystery magazines. Micki’s novels draw on her twenty-two years of experience in law enforcement. An FBI National Academy graduate, she retired as a captain before turning to a life of crime…fiction.  Visit mebrowning.com to learn more.