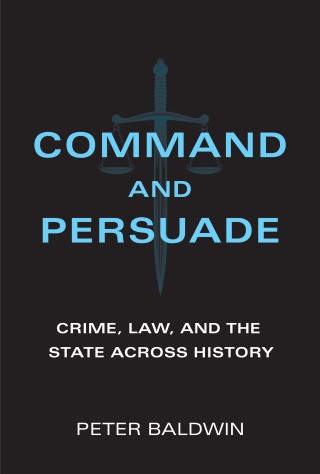 Crime, Law, and the State across History

Why, when we have been largely socialized into good behavior, are there more laws that govern our behavior than ever before?

Levels of violent crime have been in a steady decline for centuries--for millennia, even. Over the past five hundred years, homicide rates have decreased a hundred-fold. We live in a time that is more orderly and peaceful than ever before in human history. Why, then, does fear of crime dominate modern politics? Why, when we have been largely socialized into good behavior, are there more laws that govern our behavior than ever before? In Command and Persuade, Peter Baldwin examines the evolution of the state's role in crime and punishment over three thousand years.

Baldwin explains that the involvement of the state in law enforcement and crime prevention is relatively recent. In ancient Greece, those struck by lightning were assumed to have been punished by Zeus. In the Hebrew Bible, God was judge, jury, and prosecutor when Cain killed Abel. As the state’s power as lawgiver grew, more laws governed behavior than ever before; the sum total of prohibited behavior has grown continuously. At the same time, as family, community, and church exerted their influences, we have become better behaved and more law-abiding. Even as the state stands as the socializer of last resort, it also defines through law the terrain on which we are schooled into acceptable behavior.

Peter Baldwin: Peter Baldwin is Professor of History at the University of California, Los Angeles, and Global Distinguished Professor in the Center for European and Mediterranean Studies at NYU. He is the author of The Copyright Wars: Three Centuries of Trans-Atlantic Battle, The Narcissism of Minor Differences: How America and Europe Are Alike, Contagion and the State in Europe, 1830–1930, and Disease and Democracy: The Industrialized World Faces AIDS.