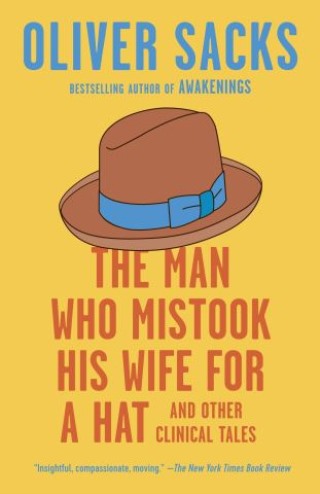 The Man Who Mistook His Wife for a Hat

And Other Clinical Tales

In his most extraordinary book, the bestselling author of Awakenings and "poet laureate of medicine” (The New York Times) recounts the case histories of patients inhabiting the compelling world of neurological disorders, from those who are no longer able to recognize common objects to those who gain extraordinary new skills.

Featuring a new preface, Oliver Sacks’s The Man Who Mistook His Wife for a Hat tells the stories of individuals afflicted with perceptual and intellectual disorders: patients who have lost their memories and with them the greater part of their pasts; who are no longer able to recognize people and common objects; whose limbs seem alien to them; who lack some skills yet are gifted with uncanny artistic or mathematical talents. In Dr. Sacks’s splendid and sympathetic telling, his patients are deeply human and his tales are studies of struggles against incredible adversity. A great healer, Sacks never loses sight of medicine’s ultimate responsibility: “the suffering, afflicted, fighting human subject.”

Oliver Sacks: Oliver Sacks was born in 1933 in London and was educated at Queen's College, Oxford. He completed his medical training at San Francisco's Mount Zion Hospital and at UCLA before moving to New York.Familiar to the readers of The New Yorker and The New York Review of Books, Dr. Sacks spent more than fifty years working as a neurologist and wrote many books, including The Man Who Mistook His Wife for a Hat, Musicophilia, and Hallucinations, about the strange neurological predicaments and conditions of his patients. The New York Times referred to him as "the poet laureate of medicine," and over the years he received many awards, including honors from the Guggenheim Foundation, the National Science Foundation, the American Academy of Arts and Letters, The American Academy of Arts and Sciences, and the Royal College of Physicians. His memoir On the Move was published shortly before his death in August 2015.