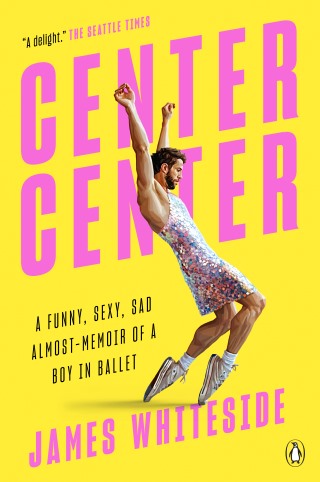 A Funny, Sexy, Sad Almost-Memoir of a Boy in Ballet

“James Whiteside is an electrifying performer, an incredible athlete, and an artist, through and through.  To know James is to love him; with Center Center, you are about to fall in love.” —Jennifer Garner

“A frank examination and celebration of queerness.”
—Good Morning America

A daring, joyous, and inspiring memoir-in-essays from the American Ballet Theatre principal dancer-slash-drag queen-slash-pop star who's redefining what it means to be a man in ballet

There's a mark on every stage around the world that signifies the center of its depth and width, called "center center." James Whiteside has dreamed of standing on that very mark as a principal dancer with the prestigious American Ballet Theatre ever since he was a twelve-year-old blown away by watching the company's spring gala. The GLAMOUR. The VIRTUOSITY. The RIPPED MEN IN TIGHTS!

In this absurd and absurdist collection of essays, Whiteside tells us the story of how he got to be a primo ballerino—stopping along the way to muse about the tragically fated childhood pets who taught him how to feel, reminisce on ill-advised partying at summer dance camps, and imagine fantastical run-ins with Jesus on Grindr. Also in these pages are tales of the two alter egos he created to subvert the strict classical rigor of ballet: JbDubs, an out-and-proud pop musician, and Ühu Betch, an over-the-top drag queen named after Yoohoo chocolate milk.

Center Center is an exuberant behind-the-scenes tour of Whiteside’s triple life, both on- and offstage—a raunchy, curious, and unapologetic celebration of queerness, self-expression, friendship, sex, creativity, and pushing boundaries that will entertain you, shock you*, inspire you, embolden you . . . and maybe even make you cry.

*THIS IS NOT A BOOK FOR CHILDREN.

James Whiteside: James Whiteside (alter egos JbDubs and Uhu Betch) is a principal dancer with American Ballet Theatre, a pop star, and a member of the NYC-based drag posse the Dairy Queens, which also includes RuPaul's Drag Race alum Milk. He has choreographed for music videos, commercials, film, and ballet, and in 2018, he starred in Arthur Pita's dance/theater work The Tenant at The Joyce Theater in New York City. Whiteside also hosts his own popular podcast, The Stage Rightside with James Whiteside. His song and music video "I Hate My Job" has been featured in The New York Times, Huffington Post, MTV, Billboard, and more.