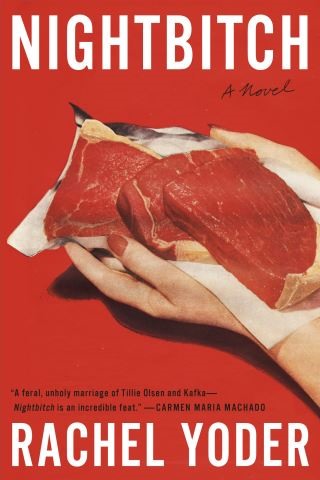 "[Nightbitch] feels like reading a deliciously long text from your smartest friend, with a hint of Kafka, if Kafka lived in the age of mommy bloggers . . . Yoder writes about contemporary anxieties with so much intelligence and charm that she can cause you to reflect without spiraling into deep depression. That’s a feat, these days, greater than metamorphosis."—Glamour

In this blazingly smart and voracious debut, an artist turned stay-at-home mom becomes convinced she's turning into a dog.

One day, the mother was a mother, but then one night, she was quite suddenly something else...

An ambitious mother puts her art career on hold to stay at home with her newborn son, but the experience does not match her imagination. Two years later, she steps into the bathroom for a break from her toddler's demands, only to discover a dense patch of hair on the back of her neck. In the mirror, her canines suddenly look sharper than she remembers. Her husband, who travels for work five days a week, casually dismisses her fears from faraway hotel rooms.

As the mother's symptoms intensify, and her temptation to give in to her new dog impulses peak, she struggles to keep her alter-canine-identity secret. Seeking a cure at the library, she discovers the mysterious academic tome which becomes her bible, A Field Guide to Magical Women: A Mythical Ethnography, and meets a group of mommies involved in a multilevel-marketing scheme who may also be more than what they seem.

An outrageously original novel of ideas about art, power, and womanhood wrapped in a satirical fairy tale, Nightbitch will make you want to howl in laughter and recognition. And you should. You should howl as much as you want.

Rachel Yoder: RACHEL YODER is a founding editor of draft: the journal of process. She holds M.F.A's from the University of Arizona (fiction) and the University of Iowa (nonfiction), where she was an Iowa Arts Fellow. Her stories and essays have been published in literary journals such as The Kenyon Review and The Missouri Review, as well as national outlets such as The New York Times, The Sun, and Lit Hub. She lives in Iowa City with her husband and son.