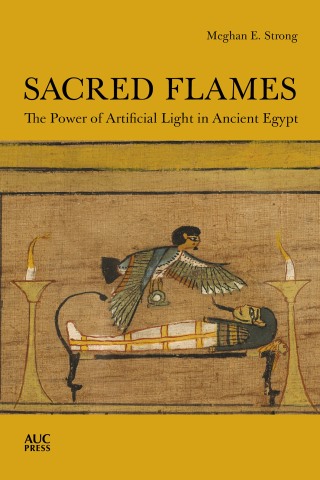 The Power of Artificial Light in Ancient Egypt

A fascinating examination of the role of lighting in ancient Egyptian culture
Artificial lighting is one of the earliest tools used by humans. By the time we began to paint cave walls, we were producing lamps consisting of an illuminant, a fat or oil, and a wick, such as a strip of fabric or a piece of reed or wood.

Drawing on archaeological, textual, and iconographic sources, Meghan Strong examines the symbolic part that artificial lighting played in religious, economic, and social spheres in ancient Egyptian culture. From the earliest identifiable examples of lighting devices to the infiltration of Hellenistic lamps in the seventh century BC, Sacred Flames explores the sensory experience of illumination in ancient Egypt, the shadows, sheen, color, and movement that resulted when lighting interacted with different spaces and surfaces. The soft, flickering light from lamps or hand-held lighting devices not only facilitated the navigation of darkened environments, such as allowing workers to see in underground chambers in the Valley of the Kings, or served as temple offerings, but also impacted upon the viewer’s perception of a space and the objects within it.

Sacred Flames illustrates the active role that lighting played in Egyptian society, providing a richer understanding of the symbolic and social value of artificial light and the role of lighting in ritual space and performance in ancient Egyptian culture, while serving as a case study of the broader impact of artificial light in the ancient world.

Meghan E. Strong: Meghan E. Strong is an archaeologist and art historian whose research incorporates sensory archaeology, ritual performance, material cultures studies, and lychnology (the study of ancient lighting devices). She is co-director of the Nuri Archaeological Expedition in Sudan and splits her academic time between the Cleveland Museum of Natural History and Case Western Reserve University.