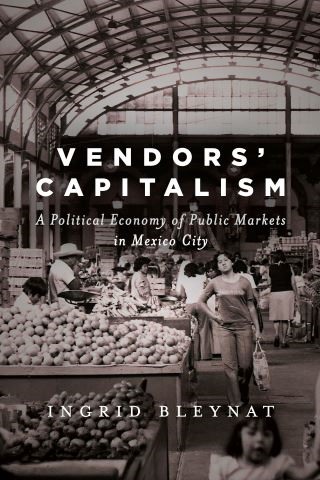 A Political Economy of Public Markets in Mexico City

Mexico City's public markets were integral to the country's economic development, bolstering the expansion of capitalism from the mid-nineteenth to mid-twentieth centuries. These publicly owned and operated markets supplied households with everyday necessities and generated revenue for local authorities. At the same time, they were embedded in a wider network of economic and social relations that gave market vendors an influence far beyond the running of their stalls. As they fed the capital's population, these vendors fought to protect their own livelihoods, shaping the public sphere and broadening the scope of popular politics.

Vendors' Capitalism argues for the centrality of Mexico City's public markets to the political economy of the city from the restoration of the Republic in 1867 to the heyday of the Mexican miracle and the PRI in the 1960s. Each day vendors interacted with customers, suppliers, government officials, and politicians, and the multiple conflicts that arose repeatedly tested the institutional capacity of the state. Through a close reading of the archives and an analysis of vendors' intersecting economic and political lives, Ingrid Bleynat explores the dynamics, as well as the limits, of capitalist development in Mexico.