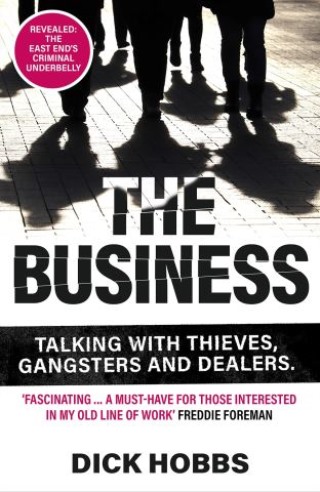 Talking with thieves, gangsters and dealers

Professor Dick Hobbs is a leading commentator on the culture of crime and criminality. East End born and bred, he is a fascinating dichotomy of the criminal and the intellectual world, allowing him a unique insight into a subject that holds fascination for so many.

When he was growing up, the East End was rocking with dock strikes, thievery and the kind of family values practiced by the Krays the Tibbs and a few dozen other outlaw clans. Violence was everywhere Crime was an unavoidable fact of life. However, his real education in Plaistow taught him that the real essence of illegal capitalism is to be found amongst the poor bloody infantry of the crime world; the jump up merchants, lorry highjackers, warehouse thieves, and middle-market drug dealers. These are the people with whom he has spent most of his professional life, and along with more exalted villains such as Mad Frankie Frazer and Charlie Richardson, these are the characters who will feature in the book, weaving the stories of these fearsome gangsters with the history and evolution of the UK underworld.

Dick Hobbs: Professor Dick Hobbs was born in Plaistow, East London. After leaving school and working in many clerical and labouring jobs, he attended night school before working briefly as a schoolteacher. As a mature student, he then gained qualifications from the London School of Economics and the University of Surrey before embarking on an academic career that took in the Polytechnic of Central London, the universities of Oxford, Durham, Essex and Western Sydney as well as the LSE. During his career, Dick Hobbs received a number of awards for his research on criminal life, including the Abrams Prize, the Radzinowicz Prize and the IASSOC Outstanding Publication Award. In 2016 he received the Outstanding Award from the British Society of Criminology. He lives in London with his family.