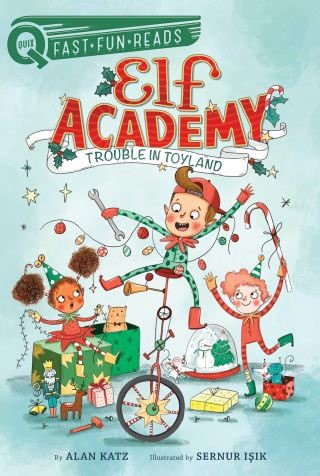 Travel to the North Pole in this first book in a brand-new series about a young elf’s merry misadventures, part of the Aladdin QUIX line of fun-to-read, short chapter books that’s perfect for emerging readers!

Andy Snowden is one of the many North Pole elves who make holiday gifts for children all around the world. But day after day, week after week, Andy starts to grow tired of the same old routine. He knows he’s destined for a different path than the other elves. But what else can a North Pole elf be good at? Maybe the Elf Academy Toy Making Contest can help Andy discover a special hidden talent!

Alan Katz: Alan Katz has been a print and television comedy writer for more than twenty years. In addition to being a multiple Emmy nominee for his work on The Rosie O’Donnell Show and Disney’s Raw Toonage, he has written for children’s programming on Nickelodeon, ABC Television, Warner Bros. Animation’s Taz-Mania, and many others. Alan is the author of several adult humor books, humorous essays for The New York Times and other publications, and books for young readers. Alan lives in Weston, Connecticut, with his journalist wife, Rose, and their children Simone, Andrew, Nathan, and David. Visit him online at AlanKatzBooks.com.