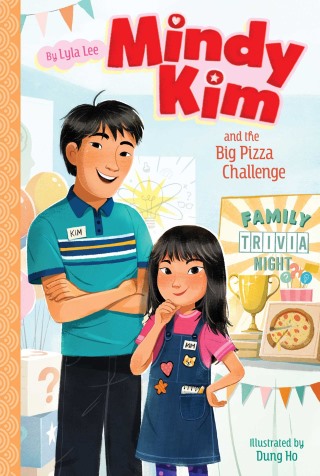 Mindy Kim loves food—from her beloved Korean staples to pizza! When a local pizza place advertises a trivia competition, Mindy can’t believe that the big prize is unlimited pizza for a whole year!

Mindy is confident she and her dad can take the top spot. But Dad is worried he might not understand all the cultural references. And he wants Mindy to know that the most important thing is to always try your best, even if you don’t win. Can Mindy and her Dad have fun together, win or lose?

Lyla Lee: Lyla Lee is an author of books for children and young adults. In addition to the Mindy Kim series, she is the author of I’ll Be the One and the upcoming Flip the Script for teens. Born in South Korea, she’s since then lived in various parts of the United States, including California, Florida, and Texas. Inspired by her English teacher, she started writing her own stories in fourth grade and finished her first novel at the age of fourteen. After working in Hollywood and studying psychology and cinematic arts at the University of Southern California, she now lives in Dallas, Texas. When she is not writing, she is teaching kids or playing with her dog, Eiva the Siberian Husky.