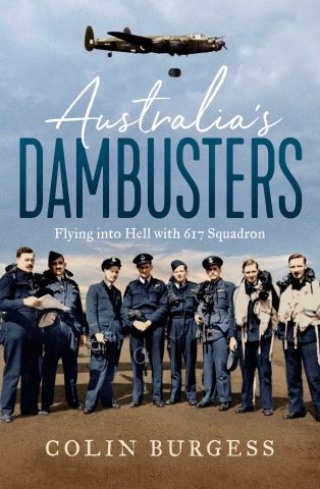 Flying into Hell with 617 Squadron

The story of 617 Squadron RAF, which carried out one of the most dangerous and audacious aerial bombing raids of World War II It was the evening of 16 M ay 1943
Nineteen modified Lancaster bombers from 617 Squadron RAF, under the command of youthful W ing Commander Guy Gibson, roared into the night sky from their Lincolnshire base. They were on a top-secret Bomber Command mission, codenamed Operation Chastise, now regarded as one of the most dangerous and audacious bombing raids of World War II – an attack on the formidable, well-defended dams of G ermany’s Ruhr Valley. Slung beneath the belly of each aircraft was one of the war’s greatest secrets – a bouncing bomb. Against the odds, and flying straight and level into the teeth of terrifying enemy f ire, they succeeded in breaching the two principal dams. Many of the 133 airmen involved that fateful night hailed from Australia, and several would be counted among the 56 who would not return to base next morning.
The Dams Raid led to the men of this gallant company – often referred to as a suicide squadron – taking on even more hazardous operations in the final two years of the war. Under valorous leadership, and now armed with massive Tallboy and Grand Slam ‘earthquake’ bombs, they obliterated vital Nazi installations, destroying such defiant targets as the heavily defended K embs Barrage and the German battleship Tirpitz, often at a terrible cost in lives.
First published in 2003, this deeply researched, revised and updated edition of Australia’s Dambusters offers a truly comprehensive account of the most famous bombing raid of the war through the words and stories of the courageous Australian airmen and others who flew on this and later perilous missions, remembered and forever immortalised as the Dambusters.

Colin Burgess:
Author Biography
Colin Burgess was born in suburban Sydney in 1947, To date, he has written or co-authored nearly forty books, covering the Australian prisoner-of-war experience, aviation, and human space exploration. Colin still lives near Sydney with his wife Pat. They have two adult sons and three grandchildren.