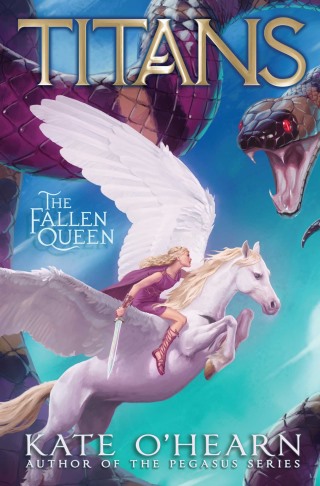 Astraea, Zephyr, Pegasus, and Tryn turn to an old enemy to save them from a desperate situation in this third book in a new series from bestselling Pegasus author Kate O’Hearn, who masterfully blends mystery and mythology together.

Jake, Nesso, and Emily have been captured by the Mimics. Their friends are determined to rescue them before it’s too late, though that’s easier said than done. Driven from their home and facing a constant stream of new attacks, Astraea, Zephyr, Pegasus, and Tryn are struggling just to survive another day against Mimics who can kill with a touch and take the shape of any friend or family member.

While Jupiter is focused on returning to Titus, Astraea knows their only hope is to take the fight to the Mimic home world and stop the Mimic queen herself. To do that, they’ll need to even the odds of seven friends versus an entire planet. So they come up with a plan to capture the one thing more terrifying than their enemy—the giant snake Lergo.

Seeking out the serpent that almost killed them seems like a terrible idea. But it will take more than one unlikely ally to save their friends—not to mention the universe—and defeat the Mimics for good.

Kate O'Hearn: Kate O’Hearn was born in Canada, raised in New York City, and has traveled all over the United States. She currently resides in England. Kate is the author of the Pegasus series, the Shadow Dragon series, the Titans series, the Valkyrie series, and the Atlantis series. Visit her at KateOHearn.com.