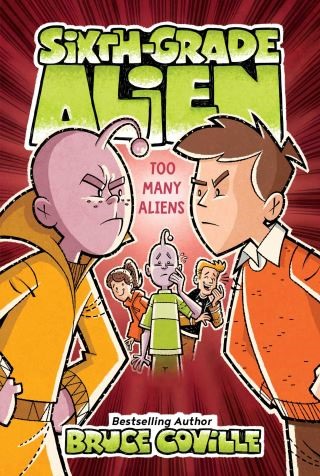 Pleskit’s alien friend comes to visit in this seventh book in the hilarious, fast-paced, and accessible sci-fi series Sixth-Grade Alien from the bestselling author of Aliens Ate My Homework and My Teacher Is an Alien, Bruce Coville.

Maktel Geebrit, Pleskit’s best friend from back home on Hevi-Hevi, is finally going to visit him on Earth. Pleskit is excited, but a little nervous, too. How will Maktel get along with Pleskit’s new friend, Tim? And just how do you cope with having two best friends on the same planet, anyway?

As if that question weren’t enough, Pleskit’s Fatherly One has an off-world visitor, an elegant trader named Ellico vec Bur. But is Ellico really a friend, or is the trader also a traitor...the greatest menace that the mission to Earth has yet faced?

Bruce Coville: Bruce Coville has published more than one hundred books, which have sold more than sixteen million copies. Among his most popular titles are My Teacher Is an Alien, Into the Land of the Unicorns, and The Monster’s Ring. Bruce also founded Full Cast Audio, a company that creates recordings of the best in children’s and young adult literature. He lives in Syracuse, New York, with his wife, Katherine. Visit him at BruceCoville.com.