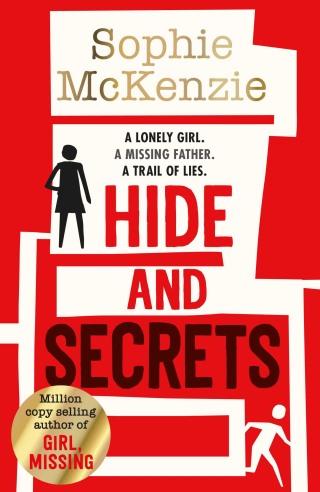 A lonely girl, a missing father and a trail of lies . . . From the bestselling author of top-ten blockbuster Girl, Missing comes an explosive new teen thriller – for fans of A Good Girl's Guide to Murder and Riverdale.

Fourteen-year-old Cat is facing a lonely summer.  Her father is missing – presumed dead – her mother has retreated into her own world and her little sister, Bess, refuses to speak. But when a boy and his father come to stay nearby for the holidays, Cat finds herself opening up to the handsome Tyler. Discovering some long-buried information, Cat and Tyler begin to unravel the trail of lies around her father’s disappearance – a journey that will take them cross-country, uncover a dangerous gang, and a plot to steal a priceless jewel. With secrets exposed, will Cat be able to begin to mend her family?

An edge-of-your-seat drama from the queen of teen thrillers, Hide and Secrets will have you looking for answers in every corner . . .

Sophie McKenzie: Sophie McKenzie was born and brought up in London, where she still lives with her teenage son. She has worked as a journalist and a magazine editor, and now writes full time. She has tallied up numerous award wins and has twice been longlisted for the Carnegie Medal.