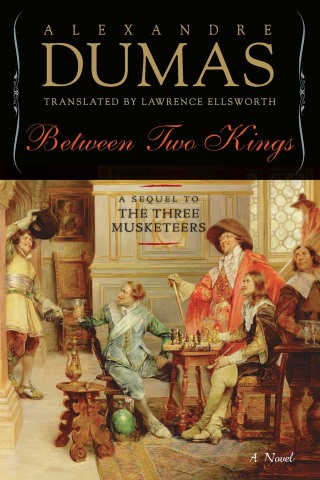 A Sequel to The Three Musketeers

For years d’Artagnan shared his adventures with his three comrades—Athos, Porthos, and Aramis—but now, in Between Two Kings, the First Musketeer returns to the forefront. This is truly d’Artagnan’s novel, bringing to a dramatic climax the story that began when he first arrived in Paris thirty years earlier in The Three Musketeers.

This brand-new translation of Between Two Kings immediately picks up the story and themes of Blood Royal, where d’Artagnan tries to thwart destiny by saving England’s Charles I; now, he will be instrumental in the restoration of his son, Charles II, the first of the two kings of the title. Disappointed in the irresolution of young Louis XIV, d’Artagnan takes a leave of absence from the King’s Musketeers and ventures to England with a bold plan to hoist Charles II onto his throne, a swashbuckling escapade in which he is unwittingly assisted by his old comrade Athos. D’Artagnan returns triumphant to France, where he is recalled to service by the second king, Louis XIV, who is now finally ready to take full advantage of the extraordinary talents of his officer of musketeers.

This newly translated volume by Lawrence Ellsworth is the first volume of Alexandre Dumas’s mega-novel Le Vicomte de Bragelonne, the epic finale to the Musketeers Cycle, which will end with the justly-famous The Man in the Iron Mask. This marks the first significant new English translation of this series of novels in over a century.

Lawrence Ellsworth: Lawrence Ellsworth is the pen name of Lawrence Schick. An authority on historical adventure fiction, Ellsworth is the translator of Alexandre Dumas’s The Three Musketeers, Twenty Years After, The Red Sphinx, and Blood Royal. Lawrence was born in the United States and now lives in Dublin.|||One of the most famous French writers of the nineteenth century, Alexandre Dumas (1802–1870) first achieved success in the literary world a playwright, before turning his hand to writing novels. In two years from 1844 to 1845, he published two enormous books, The Count of Monte Cristo and The Three Musketeers. Both novels have sold millions of copies worldwide.