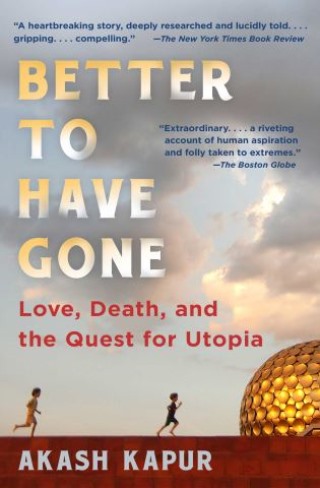 Better to Have Gone

Love, Death, and the Quest for Utopia in Auroville

*A New York Times Editors’ Choice* A “haunting and elegant” (The Wall Street Journal) story about love, faith, the search for utopia—and the often devastating cost of idealism.

It’s the late 1960s, and two lovers converge on an arid patch of earth in South India. John Walker is the handsome scion of a powerful East Coast American family. Diane Maes is a beautiful hippie from Belgium. They have come to build a new world—Auroville, an international utopian community for thousands of people. Their faith is strong, the future bright.

So how do John and Diane end up dying two decades later, on the same day, on a cracked concrete floor in a thatch hut by a remote canyon? This is the mystery Akash Kapur sets out to solve in Better to Have Gone, and it carries deep personal resonance: Diane and John were the parents of Akash’s wife, Auralice. Akash and Auralice grew up in Auroville; like the rest of their community, they never really understood those deaths.

In 2004, Akash and Auralice return to Auroville from New York, where they have been living with John’s family. As they reestablish themselves in the community, along with their two sons, they must confront the ghosts of those distant deaths. Slowly, they come to understand how the tragic individual fates of John and Diane intersected with the collective history of their town.

“A riveting account of human aspiration and folly taken to extremes” (The Boston Globe), Better to Have Gone probes the underexplored yet universal idea of utopia and portrays in vivid detail the daily life of one such community. Richly atmospheric and filled with remarkable characters, spread across time and continents, this is narrative writing of the highest order—a “gripping…compelling…[and] heartbreaking story, deeply researched and lucidly told” (The New York Times Book Review).

Akash Kapur: Akash Kapur is the author of India Becoming: A Portrait of Life in Modern India and the editor of an anthology, Auroville: Dream and Reality. He is the former Letter from India columnist for the international New York Times, the recipient of a Whiting Grant, and has written for various leading publications. He grew up in Auroville and returned there to live with his family after boarding school and college in America.