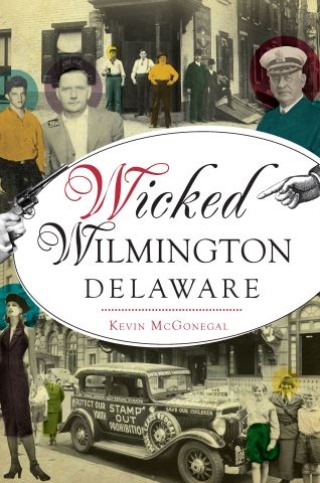 Take a journey through crime and vice in twentieth-century Wilmington, from a Tatnall Street bawdy house to the corporate boardrooms of the DuPont Company. Visit the old New Castle County Workhouse, scene of a break-in by a lynch mob and the daring escape of a notorious murderer. A police chief trying to keep his corrupt practices under wraps, agents raiding political headquarters and a detective murdered on the street were all part of city life in the early twentieth century. In later years, stories of a professional killer pleading self-defense, hiding his connections to a mobbed-up Teamsters boss, and runaway lovers caught up in an international extortion scheme show the city's darker side. Local historian Kevin McGonegal chronicles tales of Wilmington's infamous past.

Kevin McGonegal: A lifelong Wilmingtonian, Kevin McGonegal attended St. Edmond's and Archmere Academies before earning his bachelor's degree in history from Fairfield University. He worked in the Wilmington Mayor's Office under three mayors, including stints as director of OMB and the mayor's chief of staff. He has spent the last thirty-three years in Wilmington's commercial real estate market, along with co-teaching a course for twenty years in the University of Delaware's Masters in Public Administration Program. Currently, he serves on the boards of the Delaware Historical Society and Wilmington's Downtown Visions.