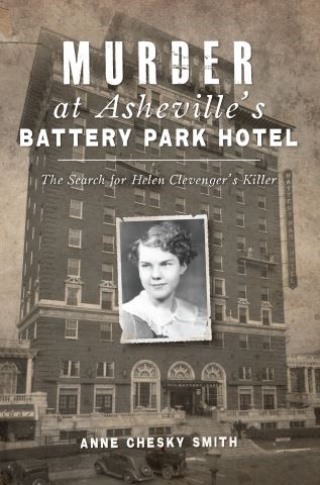 The Search for Helen Clevenger's Killer

Did the phrase "That's what I was wondering…" solve a murder?

In the morning hours of July 16, 1936, Helen Clevenger's uncle discovered her bloodied body crumpled on the floor of her small room in Asheville's grand Battery Park Hotel. She had been shot through the chest. Buncombe County Sheriff Laurence Brown, up for reelection, desperately searched for the teenager's killer as the public clamored for answers. Though witnesses reported seeing a white man leave the scene, Brown's focus turned instead to the hotel's Black employees and on August 9 he arrested bell hop Martin Moore. After a frenzied four-day trial that captured the nation's attention, Moore was convicted of Helen's murder on August 22. Though Moore confessed to Sherriff Brown, doubt of his guilt lingers and many Southerners feared that justice had not, in fact, been served.

Author Anne Chesky Smith weaves together varying accounts of the murder and investigation to expose a complex and disturbing chapter in Asheville's history.