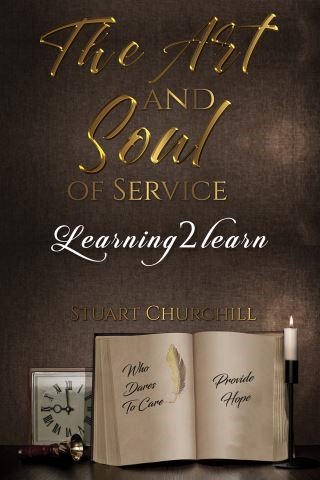 The Art and Soul of Service

In the search for truth, learning becomes the key that opens up the door of contemporary knowledge. I had no interest in healthcare politics until one day a very influential person challenged me to be part of the solution rather than just complaining. This started my learning journey into the complex world of power games, political brinkmanship and who controls the money. From the government to who provides the tools to carry out care of those who ‘suffer’? When there is not enough money to pay for the care, who makes the decision of who lives and who dies.
The problems now being seen are only the beginning of finding solutions to care that provides hope for all those who ‘suffer’ from both physical and psychological pain. The more we understand, the more learning needs to take place. Not just about solving the past problems, but to get in front and be ready to solve the questions that are going to be asked in the future. Dreaming about what is possible and finding the pathway of making it happen should be the number one priority not trying to fit a healthcare damaged foot into an ill-fitting healthcare boot. Just throwing money at the problem solves nothing, how the money is used holds the answer to reducing suffering and provides hope and care to those who ‘suffer’ every day.

Stuart Churchill: I have had a very interesting life working in Canada, Australia and the UK; there are not many nursing positions that I have not worked in. With experience working in high dependency units, A&E and especially in theatre; also, spent time as a medic on a drilling ship in the Timor Sea. Most of my working life has been in psychiatry, drug and alcohol, and dementia. Although I trained as a psychiatric nurse starting in 1969, it was not until going to Australia in 1986 that I found my calling. First, I qualified as a general nurse so I could apply for more senior positions, but while doing that the goalposts were changed and now I needed a degree. This was not something I enjoyed, being a mature student with nearly all my tutors much younger than myself. I had to learn to give them what they wanted and not what I knew, which was outside of their understanding, I swore that university life was not for me.
A couple of years later, that view was changed. An opportunity arose that was too tempting to resist, a post-graduate degree in hospital management costing only a third of its normal price of $900 per semester. Very different from my degree, I could express myself and people listened, it was exciting working in a study group, which started to stretch my mind and I just wanted to learn more. The quest to find out who I really was had started, as I went on and completed Master’s in management, would have done a PhD but I could not find a hospital that would allow me to pose the question, Do hospitals do the best they can and could they learn ‘to do things better’? From then on, I struggled with senior management as the majority did not want to learn ‘to do things better’ and seemed quite happy to be retrospective in solving problems after they happened rather than trying to make sure that they did not happen in the first place.
I travelled all the states of Australia working with poor services that were found not to be reaching quality assurance standards. It seemed that I had a knack of restructuring people management to focus on the job required of them, many had to go back to the drawing board and re-learn the skills that they were employed for. In 1990s, two social structures started to change, it was very interesting as it seemed that psychiatry was stepping out of the dark ages and widespread drug abuse started to increase when HIV and AIDS shook the nation. This virus started spreading within the heterosexual population and had nothing to do with drug use, but unprotected sex. This is where I first trained and started teaching both nurses and doctors about how to treat HIV within a hospital population, as it was thought that most psychiatric hospitals would have a substantial number of wards allocated to managing people with HIV and treatment of those in advanced stages of AIDS. This did not happen, but it gave me the bug for teaching. Learning became my life. The one thing that has allowed me to survive this complex journey has been my love of food. Working in healthcare for 47 years and five years looking after my mum and step-dad until both passed away, has been balanced by owning a restaurant and a number of catering services which over the years helped with the problems of immoveable healthcare systems, but the satisfaction seen on people’s faces as they enjoyed a good feed is the best feeling in the world.