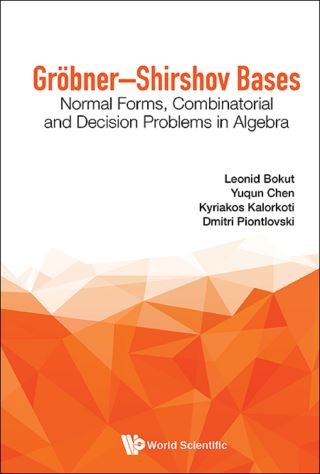 The book is about (associative, Lie and other) algebras, groups, semigroups presented by generators and defining relations. They play a great role in modern mathematics. It is enough to mention the quantum groups and Hopf algebra theory, the Kac-Moody and Borcherds algebra theory, the braid groups and Hecke algebra theory, the Coxeter groups and semisimple Lie algebra theory, the plactic monoid theory. One of the main problems for such presentations is the problem of normal forms of their elements. Classical examples of such normal forms give the Poincaré-Birkhoff-Witt theorem for universal enveloping algebras and Artin-Markov normal form theorem for braid groups in Burau generators.What is now called Gröbner-Shirshov bases theory is a general approach to the problem. It was created by a Russian mathematician A I Shirshov (1921-1981) for Lie algebras (explicitly) and associative algebras (implicitly) in 1962. A few years later, H Hironaka created a theory of standard bases for topological commutative algebra and B Buchberger initiated this kind of theory for commutative algebras, the Gröbner basis theory. The Shirshov paper was largely unknown outside Russia. The book covers this gap in the modern mathematical literature. Now Gröbner-Shirshov bases method has many applications both for classical algebraic structures (associative, Lie algebra, groups, semigroups) and new structures (dialgebra, pre-Lie algebra, Rota-Baxter algebra, operads). This is a general and powerful method in algebra.