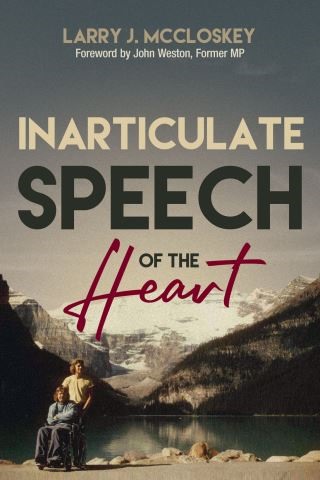 Inarticulate Speech of the Heart

For 40 years, Larry McCloskey has had the privilege of working with persons with disabilities. He applied for a job, which grew into a profession, which—because of the people—became a welcomed vocation. The people in this account might be regarded as common or even unexceptional by modern celebrity culture, but to the examining mind they are really quite astonishing. Here, Larry reveals that the most spectacular lives, those that can best instruct us on how to live life well, regardless of circumstance, tend to pass quietly and unnoticed by the distracted majority. Inarticulate Speech of the Heart, winner of the Word Guild Best Manuscript Award, exposes the deeper meaning in people’s lives beyond the material world restrictions and trendy nihilistic thinking. “Character,” Larry asserts, “is determined by how we play the cards we have been dealt,” and in this book he attempts to articulate what can only be characterized as the inarticulate speech of its characters’ perfect but wounded hearts. Prepare to be astonished and affected profoundly. “Winner of the 2020 Word Guild Best New Manuscript Award”

Larry J McCloskey: Larry McCloskey earned two masters degrees from Carleton University before working as the director of the Paul Menton Centre for Students with Disabilities for the past thirty-five years. He lives in Ottawa with his three daughters, three granddaughters, two dogs, and one beloved wife. He is the author of the award-winning Lament for Spilt Porter: Longing for Family and Home (Castle Quay Books).