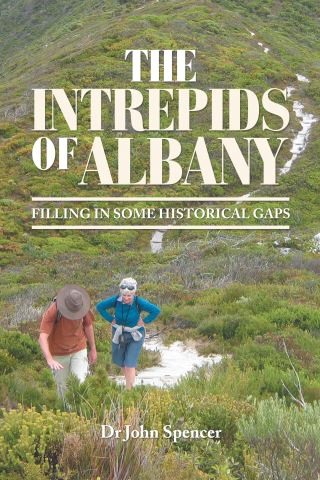 The Intrepids of Albany

Filling in Some Historical Gaps

The book explores the history of exploration and cartography of what is now called King George Sound, Oyster Bay, The Kalgan River and the surrounding river systems. The book commences with the visit in 1621 of Nuyts, the Dutch man who was literally blown off course by the roaring 40s. Some of his maps and charts were of very high caliber even by today's standard. The book then describes the increasing territorial conflicts between the French and English and how even Napolean eventually became involved, commanding Boudin to claim the territory for France. The involvement of George Vancouver and Matthew Flinders is described but also the role of Boudin, de Fraycinet , D'Urville and D'Entrecasteaux in the region. The number of French geographical place names on to days maps is a fascinating reminder not only of these early territorial disputes but also of the fact that all these explorers had to sail round the cape of Good hope to get there in the first place. Truly Intrepid people!

Dr John Spencer: Dr Spencer is an English born and bred psychiatrist who qualified in Medicine at the University of Sheffield before moving to Paris and the American Hospital where he was senior resident.Dr Spencer has worked as a psychiatrist in Vancouver,The Bahamas and Australia where was Associate professor at the University of Western Australia..In 1980 he was involved in setting up of the Albany and district psychiatric service He then moved to New South Wales where he worked in rural areas,the Black Dog depression institute, and the Mental Health tribunal service.