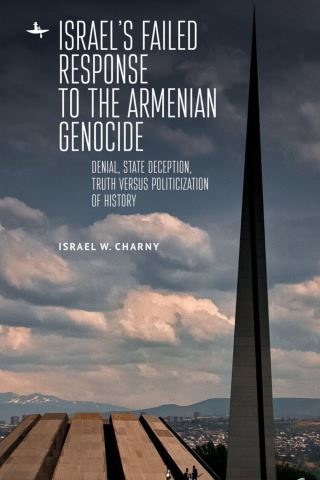 When the Turkish government demanded the cancellation of all lectures on the Armenian Genocide at Israel's First International Conference on the Holocaust and Genocide, and that Armenian lecturers not be allowed to participate, the Israeli government followed suit. This book follows the author’s gutsy campaign against his government and his quest to successfully hold the conference in the face of censorship. A political whodunit based on previously secret Israel Foreign Ministry cables, this book investigates Israel’s overall tragically unjust relationship to genocides of other peoples.

The book also closely examines the figures of Elie Wiesel and Shimon Peres in their interference with the recognition of other peoples’ genocidal tragedies, particularly the Armenian Genocide. Additional chapters by three prominent leaders—a fearless Turk who has paid a huge price in Turkish jails (Ragip Zarakolu), a renowned Armenian American who was one of the earliest writers on the Armenian Genocide (Richard Hovannisian); and a Jew, who was responsible for the selection of all the materials in the pathbreaking U.S. Holocaust Museum in Washington (Michael Berenbaum)—provide added perspectives.

Israel W. Charny: Israel W. Charny, Ph.D., is an American-Israeli psychologist who lives in the hills of Jerusalem. He was co-founder and then a president of the International Association of Genocide Scholars. He was also the founder and first president of the Israel Family Therapy Association and later president of the International Family Therapy Association. For him, the process of genocide starts with “cultural genocide,” especially of dehumanization and attribution of evil intent and destructive power to the victim people. He has openly made a stand against all denials of genocide including the Holocaust and, in particular, the Armenian Genocide, for which he was honored by the Armenian Presidential Gold Medal. He has authored influential books on genocide, including the Encyclopedia of Genocide, Genocide: A Critical Bibliographic Review, and Fascism and Democracy in the Human Mind, each of which were elected “Outstanding Academic Book of the Year” by the American Library Association.