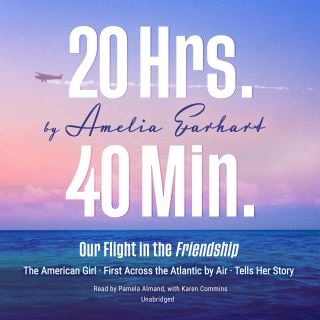 Our Flight in the Friendship: The American Girl, First Across the Atlantic by Air, Tells Her Story

Amelia Earhart captured the hearts and imaginations of people around the world when she became the first woman to cross the Atlantic by airplane. This audiobook, her personal account of the historic flight, sparkles with her high-spirited charm and adventurous determination. Narrated by a fellow female pilot with a voice reminiscent of Earhart’s mid-West twang, it includes logbook entries from the historic flight as well as an autobiographical account of her young adult life and fascination with airplanes, and a serious-minded discussion of the future of flight and the important role of women in aviation. 20 Hrs. 40 Min. remains a classic tale of adventure to this day.

Includes a bonus PDF with illustrations and photos, including photos of actual logbook pages from Amelia’s flight

Amelia Earhart (1897–1937) was an American aviator, author, and a champion of the advancement of women in aviation. She was the first woman to make a solo flight across the Atlantic Ocean and the first woman to fly nonstop, coast-to-coast across the US. She attempted a flight around the world in 1937 but disappeared near Howland Island in the Pacific Ocean.