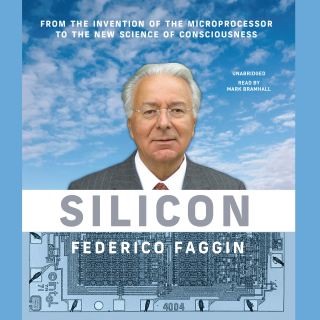 “As soon as she heard me enter, Elvia awoke from a light sleep that had overcome her as she anxiously waited: ‘How did it go?’ Excited, I exclaimed: ‘It works!’ We embraced, almost overwhelmed with feelings of euphoria and happiness, aware that something epochal had happened. On that cold January night of 1971, the world’s first microprocessor was born!”

The creation of the microprocessor launched the digital age. The key technology allowing unprecedented integration, and the design of the world’s first microprocessor, the Intel 4004, were the achievement of Federico Faggin. Shrinking an entire computer onto a tiny and inexpensive piece of silicon would come to define our daily lives, imbuing myriad devices and everyday objects with computational intelligence.

In Silicon, internationally recognized inventor and entrepreneur Federico Faggin chronicles his “four lives”: his formative years in war-torn Northern Italy, his pioneering work in American microelectronics, his successful career as a high-tech entrepreneur, and his more recent explorations into the mysteries of consciousness. In this heartfelt memoir, Faggin paints vivid anecdotes, steps readers through society-changing technological breakthroughs, and shares personal insights, as each of his lives propels the next.

Federico Faggin led the development of the MOS Silicon Gate Technology at Fairchild Semiconductor—technology that was adopted worldwide. Working for Intel Corporation from 1970 to 1974, he designed the world’s first microprocessor, the Intel 4004 (1971). Faggin led many other products, including the 8008 and the 8080 microprocessors. In 1974, Faggin began an entrepreneurial career, cofounding and leading several start-up companies. He is the recipient of many international honors and awards, including the 2009 National Medal of Technology and Innovation from President Barack Obama.