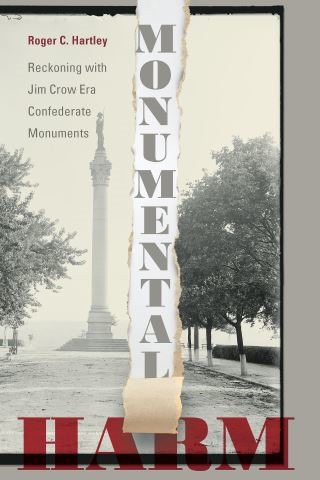 In recent years, the debate over the future of Confederate monuments has taken center stage and caused bitter clashes in communities throughout the American South. At the heart of the debate is the question of what these monuments represent. The arguments and counterarguments are formulated around sets of assumptions grounded in Southern history, politics, culture, and race relations. Comprehending and evaluating accurately the associated claims and counterclaims calls for a careful examination of facts and legal considerations relevant to each side's assertations. In Monumental Harm, Roger C. Hartley offers a road map to addressing and resolving this acrimonious debate.

Although history and popular memory play a vital role in the discussion, there have been distortions of both parts. Monumental Harm reviews the fact-based history of the initial raising of these monuments and distinguishes it from the popular memory held by many Confederate-monument supporters. Hartley also addresses concerns regarding the potential erasure of history and the harm these monuments have caused the African American community over the years, as well as the role they continue to play in politics and power.

The recent rise in White nationalism and the video-recorded murders of Black citizens at the hands of White police officers have led to nationwide demonstrations and increased scrutiny of Confederate monuments on public land. As injustice is laid bare and tempers flare, the need for a peaceful resolution becomes ever-more necessary. Monumental Harm offers a way to break the rhetorical deadlock, urging that we evaluate the issue through the lens of the U.S. Constitution while employing the overarching democratic principle that no right is absolute. Through constructive discourse and good-faith compromise, a more perfect union is within reach.

Roger C. Hartley, a professor of law at the Catholic University of America, is an award-winning teacher of constitutional law and labor law. He is the author of three other books and dozens of articles in leading academic journals.